Posted on October 16, 2013 by neathrugbysupportersclub 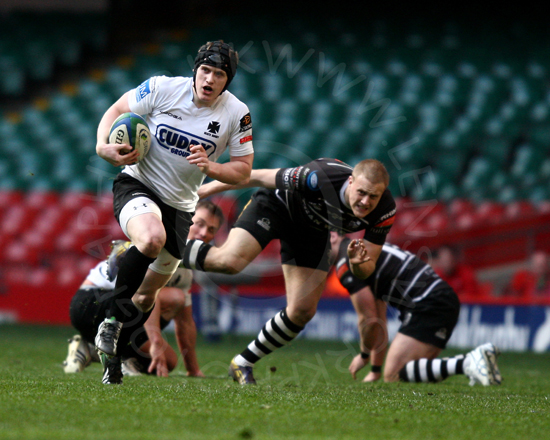 A referees interpretation when the scores tied at 31-31, cost Neath a first win over the Drovers in three attempts as replacement Lee Evans confidently stepped up and sent the ball straight between the posts from 35 metres to win the game. But the talking point was referee Neil Perkins’ opinion that Nicky Downs was a ‘lazy runner’ rather than making it just back in the defensive line in time.

Going into the match, Neath were in the unusual position of propping up the Premiership, having played four consecutive league games at home and lost them all, unluckily so in narrow defeats to Bedwas and Cardiff, while Llandovery had felt disappointed to only draw with Pontypridd last week, when victory was within their grasp.

Overall Llandovery’s support play and willingness to attack from all areas of the field constantly stretched the Neath defence – Wyn Jones had a storming game at prop, with captain Phil Day a constant menace in attack and defence – but Neath never gave in with constant threats from new Wales cap Dafydd Howells and Centre-cum-place kicker Adam Jones showing continued form in open play and with the boot.

Full-back Lee Rees and fly-half James Garland both used the strong first-half wind to good effect, constantly putting the ball behind the Blacks defence and Tom Ball scored the first Llandovery try after a drive from the line-out, but Neath came flying back, and soon responded with a try from scrum-half Josh Davies, converted by Adam Jones.

Shaun Miles, who had a fine all-round game, touched down for two tries in the space of five minutes – the first of these tries involved a bullocking run from 25 metres out, the second was from another catch and drive in the line-out. Both were converted by Garland to give Llandovery a 19-7 interval lead.
The Blacks, however, showed they weren’t out of it when Adam Jones scored a try and converted it, to keep them in touch at 19-14, before winger Sam Soul scored in the corner and stretched the lead again for the Drover-men after yet another catch and drive in the line-out.

Dafydd Howells on the wing always looked strong and elusive. He marked his return with two tries either side of a good individual try from Garland for the Drovers, to bring the scores level at 31-31.

With full time already showing on the clock, Evans proved Llandovery’s hero, but there was still time for one final twist when Neath were awarded a penalty wide out, but still in Adam Jones’s range.

Unfortunately the kick drifted wide and Llandovery had secured their third consecutive win over Neath, but the signs are very encouraging for the Blacks when Pontypridd come calling a week on Saturday in front of the S4C cameras.