Get your Hall of Fame Tickets this Saturday

Posted on February 25, 2016 by neathrugbysupportersclub 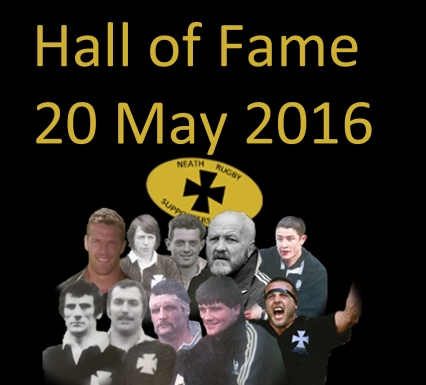 As we prepare for the visit of Cardiff Met on Saturday, we’d like to take the opportunity to remind supporters that we’ll be selling tickets for the Hall of Fame night before and after the game.

The night will see the great and the good of Neath RFC gather at the clubhouse for the annual celebration as of Neath RFC’s all time legends are inducted in to the Hall of Fame.

Tickets are priced at £5 for supporters club members and £8 for non-members. They’ll be on sale at Satuday’s game and can be purchased from the supporters club table in the clubhouse.

Following the success of previous years, tickets are expected to sell out fast, so we would urge anyone who wishes to attend to secure their ticket as soon as possible.

If you still haven’t nominated your heroes for the Hall of Fame then time is running out. Nominations close on Friday 11 March, when they will then be whittled down to the final five by a panel of supporters club members.

You can nominate in a number of ways – E-mail (info@neathrugbysupporters.com), Twitter, Facebook or simply come and see us in the clubhouse and fill in a nomination form.

If you would like to join the panel to help decide upon the final five then please let us know. We are looking for two or three supporters club members who will be available to meet to go through nominations after the Neath v Llandovery game on Friday 11th March. If you would like to do so, please come and see us at Saturday’s game or e-mail info@neathrugbysupporters.com

So get nominating and then join us on 20th May for what promises to be a memorable evening.