Posted on October 10, 2013 by neathrugbysupportersclub 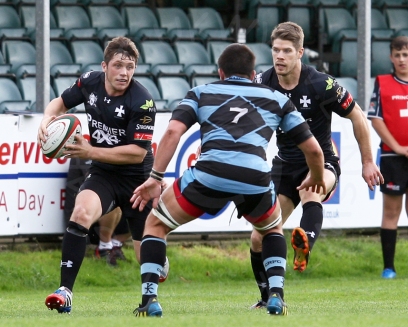 Neath showed their faithful supporters that they still have character and held out the hope of better things to come during this slender loss to Cardiff at The Gnoll.
Though this represented a fifth straight home defeat for the Blacks in league and cup, a key decision went against them. After referee Wayne Davies whistled for half-time, Cardiff were awarded a penalty – touch judge Gareth Butler seizing on midfield obstruction, which talented 18-year-old fly-half Jack Maynard, who switched from Carmarthen Quins during the summer, landed the kick to increase their interval lead to a sweet 16 points at 7-23

But the Blacks, who have faded badly on several occasions recently, came on strong during the final quarter, and ultimately were unfortunate to only collect two losing bonus points, as opposed to a draw. “This was easily our best performance of the season and although confidence remains low, the tide will turn if we continue to work hard,” said Neath head coach Neil Edwards.

The game was won and lost inside the first 10 minutes when Cardiff recorded two tries to go 14 points clear. Despite the hint of a knock on, centre Richard Smith went on to capitalise on a series of errors to record a try against his former club, which was improved on by Maynard, and flanker Ben Roach then touched down close to the flag, Maynard again splitting the sticks.

The young Fly-half then delivered a 28th-minute penalty to put the Capital club 17-points to the good, before the Blacks broke their duck on 34 minutes, with Lock Jack Jones coming off a beautiful driving maul – which Grandad Brian Thomas would have been proud of – to touchdown, Langdon converting. A Maynard drop-goal, added to the contentious key penalty, made it 23-7 at the break.

The Blacks needed to respond quickly after the turnaround – and got it when Canadian Scrum half Phil Mack, who was a constant threat and excellent hands from Ospreys centre Tom Isaacs set up a try for former Cardiff Met captain and flanker Kyle Tayler.

But, in a pun-filled paradise, the chips were down for Neath once Dan Fish swam against the tide, and broke some disappointing defence to get the third Cardiff try – and a 28-14 lead.

This served to get Neath’s battling qualities finally going, and they ripped the Cardiff defence to shreds, with breaks from Langdon, Alec Jenkins, Dale Ford and Ceri Young before replacement flanker Gareth Bateman dabbed down with Langdon adding a difficult third conversion from the touchline.
A dangerous tackle by Cardiff lock James Murphy on replacement Ceri Young close to halfway, went un-carded, but yielded promising field position for Neath to once more unleash their driving lineout.

The rumbling Black pack led to space being created in the backs for replacement wing Young to get the bonus-point try, and the outcome suddenly hinged on the difficult conversion, which fly-half Langdon just failed to oblige from wide out, allowing Cardiff to gain a first Gnoll victory in four seasons.

The result was harsh on Neath who were, first ten minutes apart, the far better team on the day, and this will bode well for the two arguably toughest tests of the Season – Llandovery this week at Church Bank, and Pontypridd at home on Saturday 26th October.

This entry was posted in Uncategorized. Bookmark the permalink.